Lake Lawn Resort’s history of hospitality stretches all the way back to 1878. The resort and its surrounds boast archaeological, historical, and cultural importance that we continue to celebrate today!

The Ho-Chunk people, who lived in the area for centuries before the first Europeans arrived, called the lake Kay-chunk-er-rah, meaning “turtle;” the Potawatomi people, who were living here at the time of Delavan’s founding, called it Wau-ba-shaw-bess, meaning “swan lake.”

Once home to the Ho-chunk and Potowatomi people, the grounds of Lake Lawn Resort feature over 40 archeologically significant effigy mounds built between 700 and 1100 A.D. devoted to ancestors of the Ho-Chunk Nation. Archaeologists believe these animal and human-shaped mounds provide clues to understanding the belief systems of the people who lived here. The Delavan area also contains less elaborate but more ancient mounds dating back to 500 B.C., as well as countless spearheads, pottery pieces, and other artifacts from Native American nations found in the area.
The settlement of Delavan was founded by Col. Samuel F. Phoenix in 1836, who staked his claim near what is now the fourth green on the golf course in 1836. Phoenix, along with his brother Edward, sought to establish an anti-slavery temperance colony, and they named the settlement Delavan in honor of a well-known temperance leader of the time.

Within a few years of the Phoenix brothers’ death in the early 1840s, the settlement lost its alcohol prohibitions and developed a new claim to fame. In 1847, a community founder named Nicholas Thorne sold 400 acres to Edmund Mabie and his brother Jeremiah, proprietors of the largest traveling circus in the country. The area’s pastures and waters offered ample space for boarding the Mabie’s Circus animals for the winter season.

Mabie’s Circus, credited with inventing pink lemonade, called Lake Lawn their home for many seasons. However, Mabie’s circus wasn’t the only big top in town. By this time, dozens of circuses wintered in Delavan, including the famous P.T. Barnum Circus!

By 1878 Mabie’s circus had dissolved and the property had been divided up among the Mabie daughters. Edmund’s daughter Anna Mary Phillips inherited the farm on the north shore of the lake and converted it into a modest guesthouse, thus beginning the tradition of hospitality that we are proud to continue to this day.

The guesthouse’s popularity grew and in 1883 led to the construction of the original 50-room Lake Lawn Hotel. As travelers flooded to this beautiful area, the hotel expanded, adding new amenities with each passing year.
The continued success of this once modest guesthouse caught the eye of the Commonwealth Edison Company, and in 1923 the property was purchased for use as a vacation retreat for its employees. Under the care of the company, a PGA golf course, ballroom, great room, and lounge were added in 1929, along with updates to the main hotel building.

Lake Lawn changed hands again during the Depression, when George W. Borg, a local entrepreneur credited with developing the clutch on the automobile, purchased the property with the objective to open a resort to the public.
Under Borg’s management, Lake Lawn underwent improvements and upgrades and gained national recognition as host to the Mutual Broadcasting Network. The network routinely broadcasted popular live performances from the property’s newly ornate ballroom. Lawrence Welk regularly performed at Lake Lawn beginning in this era, and made the resort a regular stop on his tours throughout the ‘40s.

In 1942, Lake Lawn was purchased by partners Jay Reader, Harold Zilisch, and Russ Babcock, who combined their skill and vision to add new attractions to the resort. It was under this leadership, that the Resort began year-round operations. Visitors could now enjoy all of the fun winter has to offer along Delavan Lake, including lively Saturday night dances and festive New Year’s celebrations.

A FULL-SERVICE RESORT, RICH WITH HISTORY 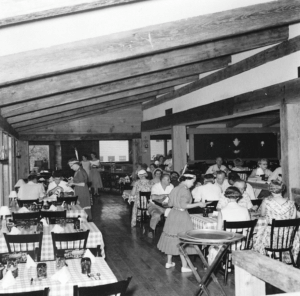 During the 1950s and ‘60s, Lake Lawn continued to grow and prosper under various owners. Over time, facilities and amenities evolved as Lake Lawn responded to the changing sensibilities and expectations of its guests. Over the decades the resort underwent many changes, though always retained its core as a friendly and relaxing destination offering recreation, connection, and retreat.

In 2010, Lake Lawn closed. Fortunately, a group of local investors who recognized the value of the property’s history and potential purchased the Resort in 2011 with the intent to reopen. Their investment of more than $4 million in renovations and capital improvements ushered in the current era. Today, Lake Lawn Resort is a thriving, lively, and comfortable full-service resort with a full menu of unforgettable experiences.
While Lake Lawn Resort is always looking toward the latest features and improvements, we are proud to share the resort’s heritage with our guests in hopes that all may commemorate and cherish its rich history.